Start a Wiki
The Kirby amiibo figure is part of the first Super Smash Bros. wave.

Round, pink and surprisingly powerful, Kirby is one of the most iconic heroes in video game history. A denizen of the peaceful planet Pop Star, Kirby became a citizen of Dream Land after defeating King Dedede. He can inhale things with his big mouth, either copying their abilities or spitting them out again. 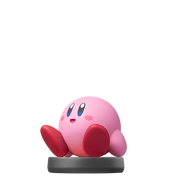 Kirby's Super Smash Bros. box
Add a photo to this gallery
Retrieved from "https://amiibohub.fandom.com/wiki/Kirby?oldid=4096"
Community content is available under CC-BY-SA unless otherwise noted.